The new temple construction project is currently in its finishing stage. Here are some pictures taken recently.

Sri Krishna Janmastami is the most important festival of our Temple.The entire world celebrates the divine appearance of Lord Krishna. In our temple, the arrangement for the festival has already END_OF_DOCUMENT_TOKEN_TO_BE_REPLACED

The Krishna Janmastami was celebrated on the 12th August 2020 at the Sri Sri Radha Krishna Temple in Colombo, Sri Lanka. The disappearance day of the founder acharya A.C. Bhaktivedanta END_OF_DOCUMENT_TOKEN_TO_BE_REPLACED 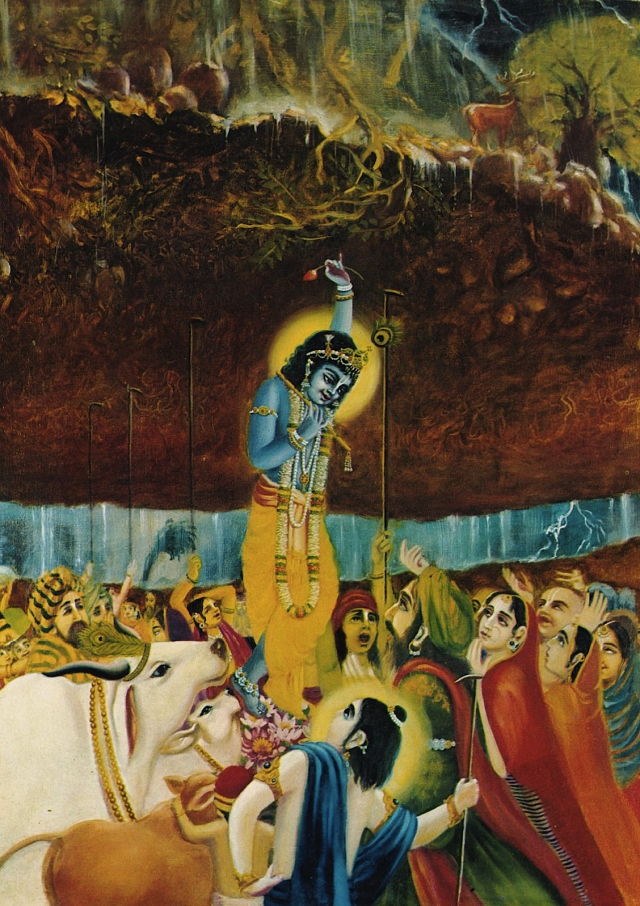 In Sanskrit the cow is called as ‘Aghnya’ which means “not to be killed”. The Vedas consider the cow as the most sacred animal and killing of a cow is considered to be the same as killing a Brahmin. The Veda mentions that there are seven mothers namely 1) atma-mata (one’s biological mother) 2) guroh patni (the wife of one’s teacher) 3) brahmani (the wife of a brahmana) 4) raja-patnika (the wife of the king) 5) dhenu (the cow) 6) dhatri (the nurse) and 7) prithvi (the Earth). Hence it is evident that the Cows should be considered as ‘Mother’ with all the sentiments and protection granted to one’s own biological mother. Cows are also considered to represent ‘Mother Earth’ which in turn signifies the importance to honour them and worship them. Not only in Hinduism, other religions such as Jainism, Buddhism and Sikhism also prohibit killing of cows.

Lord Krishna descended to Earth 5,000 years ago and grew up as a cowherd boy in Vrindavan which was also called as “Goloka”(Cow Planet). During this time Lord Krishna spent most of his time with Cows and treated them with utmost love and care. He showed the human kind the importance of Cows and the need to treat them with love. Lord Krishna is known as Gopala, the protector of the Cows and Govinda, the one who gives pleasure to the Cows. He showed that the Cows were to be considered more auspicious than demigods and directed the villagers to worship cows along with the Govardhan hill which provided all the resources such as grass for the cows to graze. Angered by this change, the God of rain, Indra, reacted with heavy rain and thunderstorm in an act to punish the villagers to worship him and not the hill or the cows. Lord Krishna, in return, lifted the Govardhana Hill with his little finger and held it as an umbrella, thereby providing shelter to all the residents of the village including all the cows. Indra having his ego humbled by the Lord, descended to earth and worshiped Lord Krishna and sought his mercy.

This event has been celebrated over the years by the devotees who conduct Govardhana pooja by making a replica of the Govardhana Hill with different varieties of food and worship Lord Krishna and the Cows which are very much loved by Lord Krishna and been an integral part of the human lives.

In Sri Lanka, the ISKCON temple celebrated this event on the 20 October 2017. 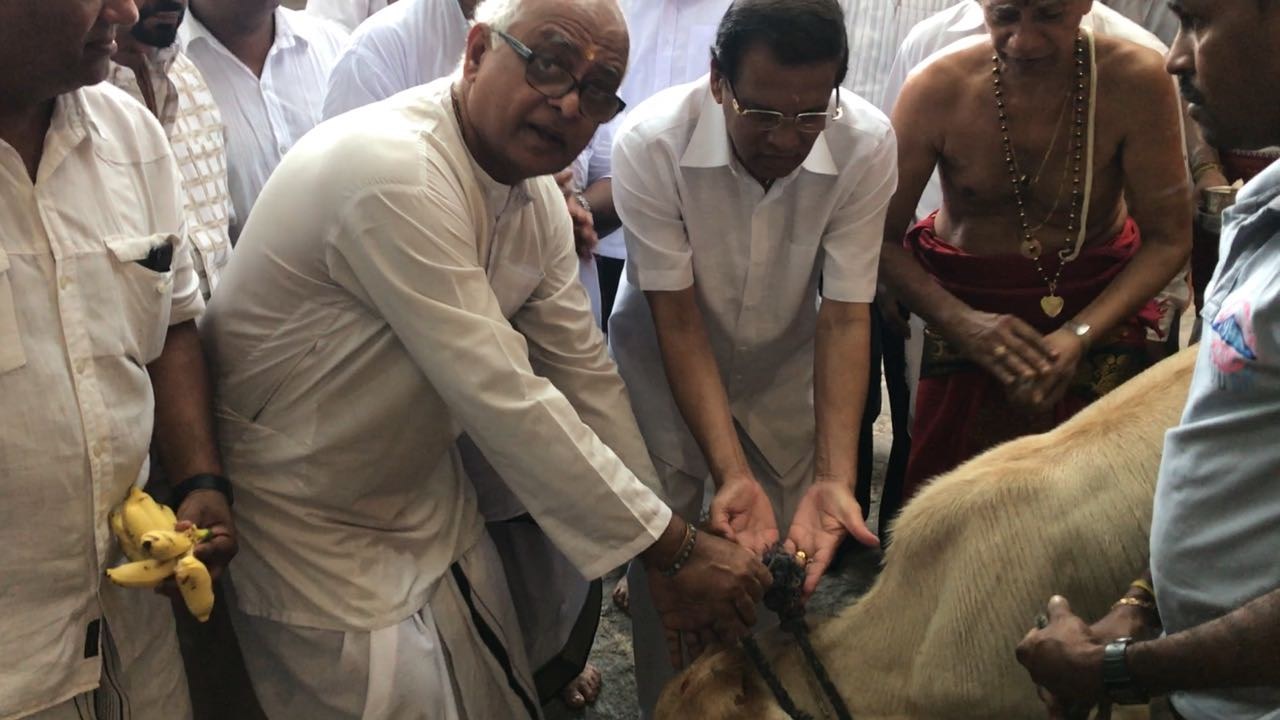 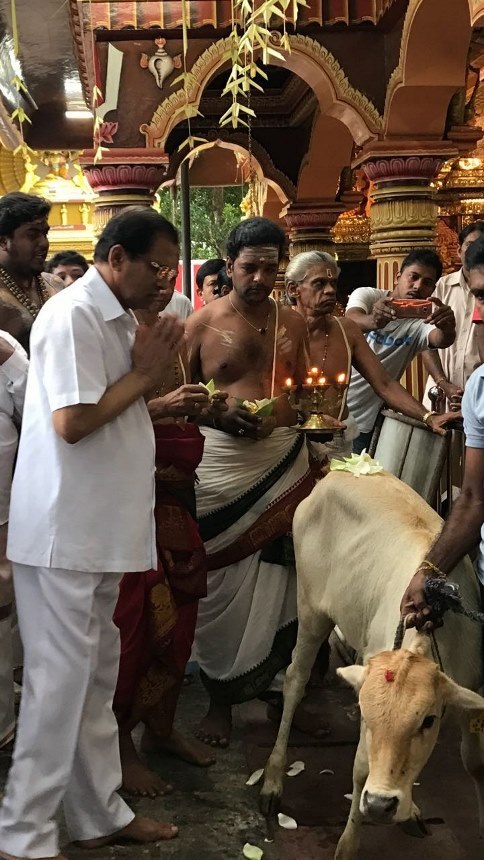 ISKCON Sri Lanka has its own Goshala or cow shelter which is located in Hekita, Wattala. Here, cows, bulls and calves rescued from slaughter houses are given protection for the rest of their lives. The milk obtained from them are used to nourish over hundred children at ‘Bhaktivedanta Children’s Home – Gokulam’ which is also established and run by ISKCON Sri Lanka. Currently there are more than 50 cows including calves and bulls and the protection of the Goshala. 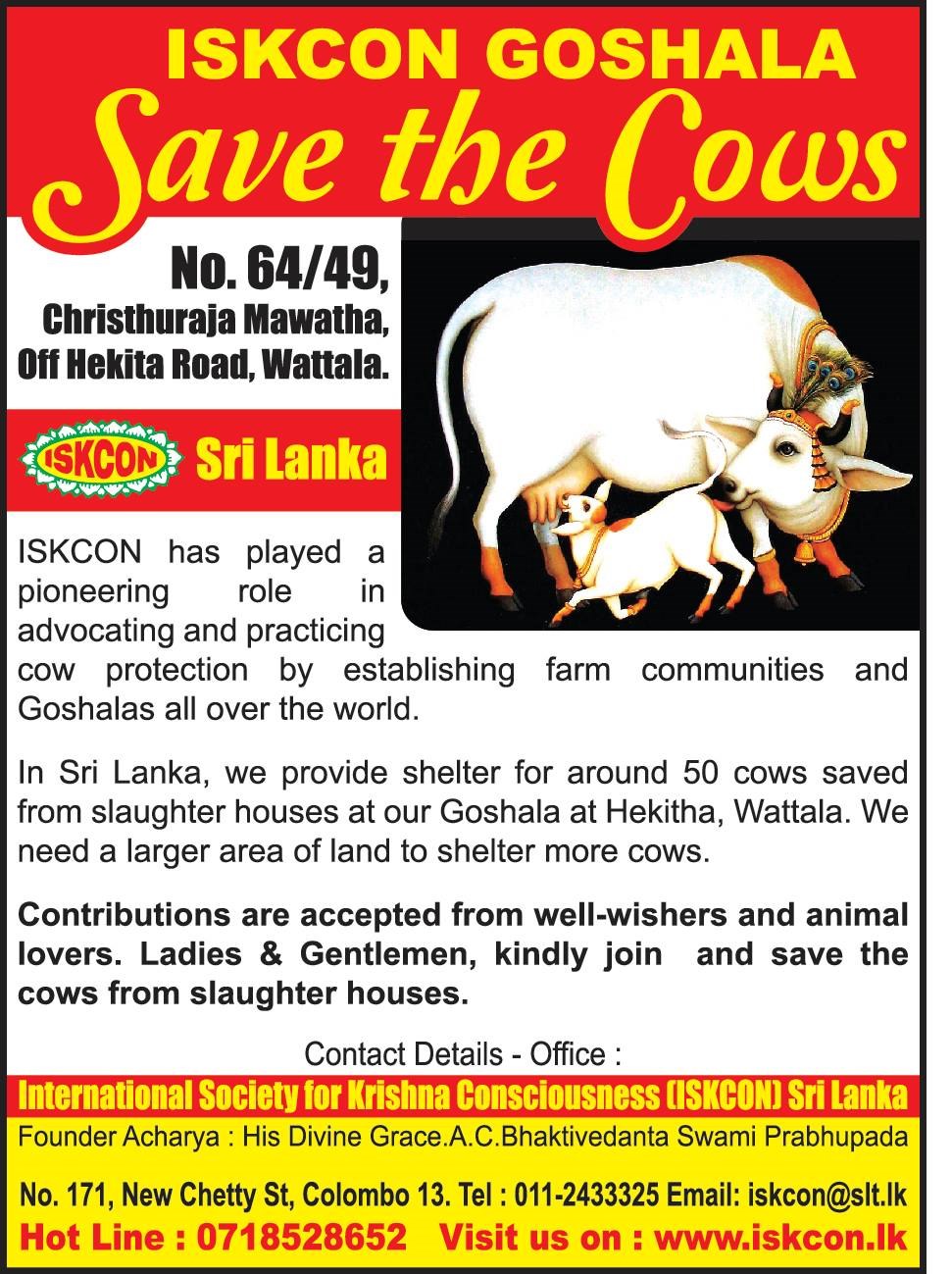 On September 01, 1896, the day after Sri Krishna Janmashtami in Tollygunge suburb of Calcutta, Abhay Charan who later became known as Srila Prabhupada was born to Rajani and Gour Mohan De. His father, Gour Mohan De, and his mother Rajani, named him Abhay Charan which means one who is fearless after having taken shelter at the lotus feet of Lord Krishna. As per their tradition, an astrologer was called to prepare his horoscope after birth for the baby and he revealed that when Abhay Charan reaches the age of seventy, he will cross the ocean, become a great teacher of religion and establish 108 Krishna temples.

Srila Prabhupada eventually set out to America in 1965 and established the International Society for Krishna Consciousness (ISKCON) at the age of sixty-nine. He travelled around the world fourteen times, established more than 100 temples of Krishna and initiated more than 10000 disciples into Krishna consciousness. We are all eternally indebted for giving us Krishna Consciousness and for creating a shelter for the whole world to live in.

Please come and join us in this glorious event with your family and friends….

Please visit our event page for photos and other updates:

The auspicious appearance day of Lord Balarama, the elder brother of Lord Sri Krishna, was celebrated on the full-moon day of Shravana which falls on the 7th of August this year. Lord Balarama first appeared in the womb of Devaki as her seventh son (the first six sons were killed by her brother Kamsa) and was then transferred to the womb of Rohini and appeared as the son of Rohini and Vasudeva.

Lord Balarama also known as Baladeva and Sankarshana, is the first personal expansion of Lord Krishna, the Supreme Personality of Godhead. All other incarnations expand from him. They are both one and the same identity and differ only in form. In Lord Krishna’s pastimes, Lord Balarama plays as Krishna’s older brother. Together Krishna and Balarama enact many pastimes as cowherd boys in the land of Vrindavana. He also killed demons like Dhenukasura, Pralambasura, Dvivida and Balvala. Lord Balarama is the eternal companion of Sri Krishna. He came as Lakshmana with Rama and later as Nityananda Prabhu with Caitanya Mahaprabhu.

Lord Balarama is the source of all spiritual power which helps one attain the highest bliss of life and hence the name Balarama. He is the protector of the devotees of the Lord. Without his mercy one cannot approach the Supreme Lord Sri Krishna. Therefore his appearance as the son of Rohini and Vasudeva is celebrated by devotees all over the world.

Sri Sri Radha Krishna Temple is celebrating the auspicious day of appearance of Balaram on 7th of August 2017. The day time program ends with scrumptious feast of Maha Prasadam. This auspicious day also marks the end of Jhulan Yatra and in the evening, devotees can take part in swaying the swing and offer direct and personal service to their Lordships and enjoy the cultural programs as well.

Join us and experience the bliss of Krishna Consciousness!

The Sri Sri Radha Krishna Temple in Colombo is celebrating “Jhulan Yatra” from the 3rd of August 2017 until the 7th of August 2017. This festival is to commemorate the END_OF_DOCUMENT_TOKEN_TO_BE_REPLACED

The Hare Krishna Movement is a worldwide community of devotees practicing bhakti-yoga, the eternal science of loving service to God.

The movement was founded in the western world in 1966 by His Divine Grace A.C. Bhaktivedanta Swami Prabhupada, a pure devotee of God representing an unbroken chain of spiritual masters originating with Lord Krishna Himself.  ISKCON has since developed into a worldwide confederation of 10,000 temple devotees and 250,000 congregational devotees. Better known as the Hare Krishna movement,

There are eight principles which forms the basis of the Krishna consciousness movement. We invite all our readers to consider them with an open mind and then visit one of the Hare Krishna centers to see how they are being applied in everyday life. With the instructions and blessings of Srila Prabhupada, some devotees with Mahakarta Das (current temple president) came to Sri Lanka on 4/10/1976 to open a temple in Colombo.